The Legend of Mura

Octras licked his cracked lips as he studied the ground. The rocks around his feet slipped when he stood. He knew that his shell thief was somewhere in this pass, hiding among the jagged cliffs that jutted out along the face of the mountain. It was an ideal hideout, really. From the road, it was impossible to see any of the caves that existed among the broken cliffs. And the terrain was treacherous; no man was designed to climb the slope. Even as Octras drew breath, the rocks gave way, and he slid down a finger-length. The only way to find sure footing here was to test it.

As a fifth-grader, in one outdoor game with my siblings, I came up with a new idea: The Legend of Mura. I came up with the names for it; Jacob was Octras, I was Cira, Liz was Shelja, and Michael was determined to be called Jake. Cira was changed by Jacob to Tsira in a PS2 version of an RPG maker and I thought Shenra was less crazy. Octras ended up being the only character who retained his original name and spelling.

The characters themselves changed over time. Instead of beginning with four people, I decided to introduce Shenra and Jakob later on in the story. Jake's personality probably changed the least, though he's not nearly as whiny now. Shenra was more of the classic Tolkien elf to begin with, but the definition of 'elf' has changed for me, and Shenra has a lot more influence on things than she did. She used to just exist as an extra person good for fighting but leaving when she gets 'home'. Now she actually interacts with the other characters, particularly Octras.

As for the two master characters, they changed a lot. Octras was just the charismatic bodyguard to the hero, but now he is the hero. The story is told exclusively from his point of view. He actually has a whole romantic complex going on behind a lot of the other stuff, and he compares things to his training a lot less. He's less of a caricature. Tsira... well, she was the selfish character who just needed a friend, but now she's something much more.

I still use the name Tsira for almost everything in the virtual world: my email, this blog, my deviantART page, and my gaming name. But I'll make it clear now; the Tsira that is me and the Tsira of my book are completely different people. At one point, they were similar, but both have gone in different directions. While I try to maintain an intelligent persona as she does, the similarity ends there. I am not her anymore. She has her own life.

But the real reason for talking about this is the picture I discovered while going through that stack I told you about. I made this when I was ten.

Behold the original logo in all its pixellated glory: custom drawn (even the text) in Paint. 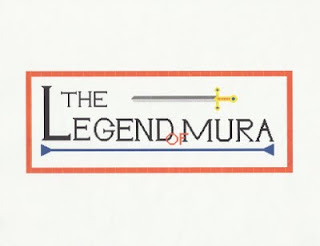