(If you click on the link, watch out! There's spoilers...)
My rating: 4 out of 5 stars ****
All right. So we got three games in the mail last month, and this was one of them. And I finished late last night, when I probably should have been sleeping. But I have to admit, this game was really addicting.
It doesn't really sound like the sort of thing that should be in video games. I mean, you're an attorney. Most of the game takes place within a courtroom, during trials. When you're not in the courtroom, you're out talking to people, finding clues through dialogue or gathering evidence.
But there's something fascinating about court mysteries. If your defendant is innocent, then whodunnit? Through listening to testimonies and pointing out contradictions, you dig to the bottom of everything to reveal the truth. And it's actually very active. The music intensifies as you discover pieces of the real story, and the characters dramatically change in appearance, as if you've physically punched them, when their lies are exposed.
There are five episodes, steeply increasing in difficulty as you go. The first case is something of a tutorial, taking only thirty minutes to an hour, and the last case took me over seven hours to solve. When I got to the last case, I wasn't bored by this extra length, since it introduced many new features: spraying for traces of blood, finding fingerprints, examining evidence in a rotational 3D area, and even watching a video tape. And as far as testimonies go, it was always very gratifying when I figured something out and revealed the contradictions in someone's statements.
The characters are complex, having their own set of ideas, motivations, and talents. I was particularly interested in the character Miles Edgeworth, a prosecutor who is involved in almost every case in the game. When you meet him, he's a scary, confident, and somewhat stubborn man, doing "anything to get a guilty verdict." But he's much more than that, as you soon discover.
All right. So here's where it had some trouble. First, there are massive amounts of dialogue, which isn't a bad thing, but it led to some typography errors. It didn't really start until halfway through the game, when I noticed a "too" instead of "to." After that, I noticed a few "your" instead of "you're(s)," and things like "probable" instead of "probably."
That always puts a damper on my mood, but I have to admit it happens a lot with video games that are originally made in Japan. Translating a novel-length script from Japanese into English is undeniably difficult. But they did do a very good job integrating colloquial terms and patterns of dialogue.
The other problem I had while playing this game has to do with getting "stuck." At times I could not progress because I was overlooking a little thing somewhere along the line (outside the courtroom), and I had to present evidence until a person was willing to talk to me about something. Sometimes I was talking to someone, Phoenix would think "maybe she'll talk to us if we show her such-and-such" and so I would show them, but then the option for a new subject didn't come up. I would then present some unrelated photo, etc. and when I got a tiny unrelated reaction, the next dialogue option, about the first thing, would appear. It was a little frustrating.
In the courtroom, I sometimes had the opposite feeling. I knew what the contradiction was, but if I pointed it out too early, I was penalized. I was like, "Phoenix, just figure it out, already, so I can move on!" So I'd say "Hold it!" to something, Phoenix would think about it and say he had an idea, and then I could do exactly what I'd done a minute before and continue with the story. Sigh.
But overall, I really enjoyed this game. It was an unexpected delight as a game, and I'm very glad that we bought it. I think I'll get the next one soon.
--
Mii #4 was: Xisht. So Valerie and Jaron both get fifteen points. Next up...
Who is this? 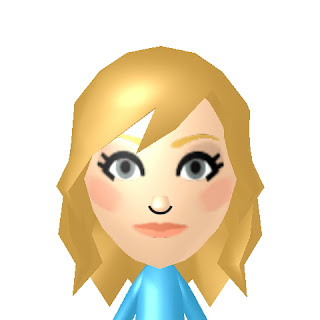