Finally... the CONduit people posted the dealer's room list at the end of last week, and we're on it. And we're pretty much set. We've got Jaron's business cards, copies of Villages, Game Crafter stuff, Nikki's book previews... and my art prints. 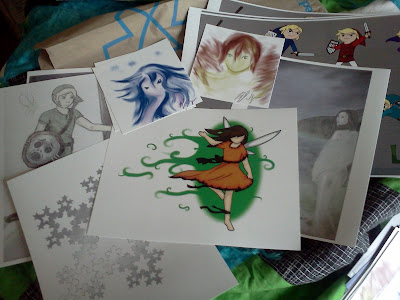 It took us about three hours at the print shop to get them all, because there was only one person working, tons of customers, only one functional color printer, and tons of pictures to go through.

We had fun, though. Just seeing these in print form makes me so happy I could almost cry. Plus the guy who was working there was super nice, really impressed with the Zelda fan art, and promised to buy one if there are any left after CONduit is over. :) I kinda feel like just giving him one for free--he was so patient with my indecision over how many to make and what paper to print on and what size to make them... and let me stay to cut out the 5x5" prints after the store actually closed. People like that make my day.

Well, anyway, now that getting those printed is out of the way, I'm not stressed about this any more, just excited. It's usually a subtle thing for me; no jumping around or screaming at the top of my lungs... but I'm ready to meet people, attend panels, play some games, talk geek, and maybe buy some cool stuff.


I've got all sorts of new art to show off. I said before I made a few specifically for the con, as well as the girl in the middle of the pic above, which is actually concept art for a children's book! I also helped Nikki redesign a symbol for her book Harbinger, and the cover looks totally amazing. This has already been an incredibly productive year for me... CONduit starts tomorrow, and then there's only a few days left until freedom from work allows me to rewrite Tsirash to my heart's content.

-Tsira
Posted by Rachel Frost at 9:00 AM 2 comments

Oh, goodness, my rewrite starts next week, and I need this book right now! 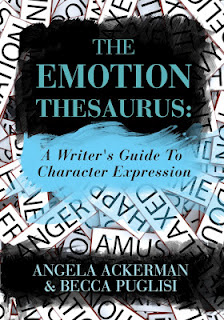 Over at the Adventures in YA and Children's Publishing blog (which you writers out there should follow if you're not doing so already) they interviewed the authors of The Emotion Thesaurus.

Becca Puglisi pointed out three common mistakes writers make when writing emotion:
These are all things I could improve on--I know I'll be using this information regularly, especially when revising and rewriting.

-Tsira
Posted by Rachel Frost at 9:00 AM 5 comments

For some reason, I've gotten totally addicted to this song. Maybe it's because I'm reminded of a certain character of mine, or because musically it's not as formulaic as most stuff on the radio. It's catchy... and twisted.

(It was actually kind of hard to find a video of "Body" because there is another song of theirs called "Body of Years" and that's what comes up when I search for it. Anyway, enjoy while the video lasts.)

-Tsira
Posted by Rachel Frost at 9:00 AM 0 comments

New ideas come from everywhere. I am inspired by anything and everything--and every once in a while, one of those random ideas is actually worth exploring. After all, the greatest stories often have humble, even odd, beginnings.

You may or may not have clicked on the tab at the top of my page that says "Dungeonball." It's something my husband and I have been developing collaboratively for several months, and we are now trying to finalize the mechanics so we can focus more on the design. Mostly, that means we've had to play-test the game... a lot.

A few days ago, I had the opportunity to play-test the game after finishing the 'reading' portion of our home-based writing group. Three of my friends played as heroes, and I was one of three playing as monsters. During our battle for the Dungeonball, something inside me just clicked.

"Guys," I said, "I just had an awesome idea. What if there was an actual world with this sport?"

From there, it was idea after idea, molding, shaping, changing, playing... I actually quit playing the game, letting someone else take over for my dragons, while I scribbled down my thoughts on a nearby notebook.

So. From here, I have a Story Starter for the writers out there:

Take a look at your favorite board game. This could be anything from party games to hardcore DnD. You'll probably find it easier to use a game with "characters," but you don't necessarily need them.

For instance, look at Monopoly. You could pull out a character who has a compulsive need to buy whatever he sees. You could use the idea that a person or company is taking over an area with their vast wealth, bit by bit. Or, you could imagine that monopolies have been legalized, and trading properties in exchange for a place to stay the night is now common.*

Now go write. Maybe you've got something to throw away, just used for practice... but maybe, just maybe, you've struck a golden idea. The only way to really know is to get out there and write.

*And yes, you're free to use those ideas. :) I'm not so good with economics, so writing a story like that would be ridiculously tough for me.
Posted by Rachel Frost at 9:00 AM 10 comments

CONduit is just around the corner. If you live in the Salt Lake area, and like SciFi or Fantasy, (which, if you follow me, I assume you do...) you should consider going to this con. It's the first time for me, so I can't speak from personal experience, but close friends have told me it's been really fun in years past. It's relatively cheap for a three-day pass, and you can come visit me in the dealer's room if you have some free time between other cool stuffs. :)

Looks like the consensus on my poll is for me to promote my book there... which I'll gladly do. Although, because I'm scrapping the draft I have and will be rewriting it in a few weeks, I won't have too much actual writing to show for it. My biggest concern, then, is going to be art prints. I have a few sweet pieces I've made specifically for the occasion. Even if I don't sell very many, I'll call it a success. Why? Because the main focus of the table isn't actually going to be me. It's mostly about Jaron's card game, Villages.

The Game Crafter has agreed to sponsor our (meaning Jaron's, Nikki's, and my) table at CONduit--since the main focus will be to promote Villages, we're also taking on the task of promoting the site that has made Villages possible. We got all of the parts they sent us in the mail the other day, and it's gotten me really excited. There's a table skirt, some posters, t-shirts, game pieces... so much cool stuff.

We'll have some sweet giveaways, too, so even if you're busy, stop by the table to get an entry into the drawing. We'll have some gift certificates, button pins, and some other epic, awesome prizes to win, so come visit us. CONduit runs from May 25-27, so be sure to mark it on your calendar now! :) I look forward to seeing you there!

(This is... all assuming that the volunteers at CONduit ever get back to us... we paid for a table and everything like a month ago, but they haven't said anything to confirm that we have our spot. It's pretty frustrating and a little worrisome, though I recognize that they're busy and working on it.)
Posted by Rachel Frost at 9:00 AM 4 comments

...All that effort, wasted... well, I guess I better get back to writing, instead of putting it off by playing this horrible time-vacuum...