Things I've Learned at the Library

I dreamed of working at the library for years. It always seemed like a fantastic blend of things I love: books, atmosphere, and organization. And it turns out, a lot of other people want the job, too. When I took my shelving test, there were 40 others in the room, and at least 4 more testing sessions were scheduled. What the libraries in Salt Lake do is take the highest scorers (45/45 in my case) and form a pool that they pull from whenever a slot opens up. Even with my score, I still interviewed several times before someone wanted me. It turns out I am really good at my job, but after a year of working here, I have learned a great deal more than I would have ever expected.

When you work for a library, literally everything you have ever learned about everything might at some point become relevant. It should be obvious that reading a lot of books helps you recommend good ones to patrons, and the actual librarians, with their Master's in Library Science, know a heck of a lot more than the rest of us. Knowing how the computers and copy machine and printer work is good, too. But one day you might be asked something like, "How do snails see?" Or "I heard Elvis was actually gay; is that true?" (Answers: Snails have eyes on their top tentacles, and Elvis may have been bi.) I can always direct patrons to a book if I can't answer, but every bit of knowledge helps.

The Dewey Decimal System is Awful/Awesome

It depends on what you want. Really. If you want ALL the wolf books, 599.77 is the section for you. If you want ALL the fairy tales, try 398. But if you want the fact check companions to the Magic Tree House series, or the popular "You Wouldn't Want..." history books, or you're planning a trip to China, good luck. They're all over the place. For that last one, books about China as a country are in 951, travel guides are 910-919, and foreign language is in the 400s. Depending on the library, the dictionaries might be separated from the language learning courses, too.

The Customer Is Not Always Right

Most patrons are kind and wonderful people, but I've been yelled at for protecting magazines from destructive children, not having someone's favorite book on the shelf, and listening to music (I wear one ear bud while I work, as does everyone else). I can generally avoid unpleasant people, however, as I'm always  walking around and not confined to a desk like those at the account management and information desks are. They are sometimes expected to waive fines right and left, but it's not our fault that guy checked out 50 DVDs at once and brought them all back 2 days late. And it's also not our fault that girl's holds were pulled and checked out to someone else because she came in a full week after the holds expired. But that's nothing. The real problem with patrons is...

Our workplace is 90% female, and it's sort of our job to be kind and helpful. Again, I can usually sort of avoid the problematic ones, as I'm always walking around, but I have received my fair share of unwelcome comments. It usually comes from waaay older men. A few are well-meaning and don't realize they're being creepy, but one time this rank cigar-stinking man came up and said, "You're so cute, why don't you come home with me?" And when I said, "Nope," he sat in a nearby chair and stared at me, so I moved my cart to be out of his view. There was another case where a boy who looked 18 complimented me every time I passed him on Thursdays, starting from a simple, "I like your shirt," but getting to an uncomfortable degree with "cute back pockets" and whispery "so beautiful"s after about a month--I would have gone to my supervisor at this point, but when I mentioned my husband in the boy's presence he never talked to me again. (As if he'd never noticed the ring on my finger before.)

You know that caricature of a crusty old spectacled librarian, shushing anyone who makes noise for any reason? Completely and totally false. Libraries are evolving. Children are given designated learning and play spaces, and while we aren't encouraging screaming, we don't interfere with noisy people very often. And when the library hasn't opened yet, our librarians talk louder than most. "Hey, Rachel! Are you in here?!" "Yeah?" "Could you come help me with this?!" The other day I was in a back corner pulling holds, about an hour before we opened, when I sneezed--my sneezes make this dainty little "achiew"--and I immediately heard one of the librarians yell, "...CUTEST! ...SNEEZE! ...EVER!"

I've come to feel like the library is home--a busy one, with lots of visitors, but a home nonetheless. It's a safe space for everyone as long as you're not causing trouble or creeping on my co-workers, and we're cool if your tastes are considered strange anywhere else. It's a judgment-free zone.

Unless you're checking out Fifty Shades of Grey. Then I'm totally judging you. ;)

Happy New Year! 2014 was a big one for me. Variety is the key to longevity, I've discovered, as it felt like a much longer year than any other has. It always felt like things were happening--good or bad--and memories were created and shared. Sometimes I picture chapters of my life, and I come up with easy dividers that span years, like, "Frenemies" and "High School" and "Memoirs of a Paraeducator". But this year has had many chapters of its own, so I'll share just a few of them. 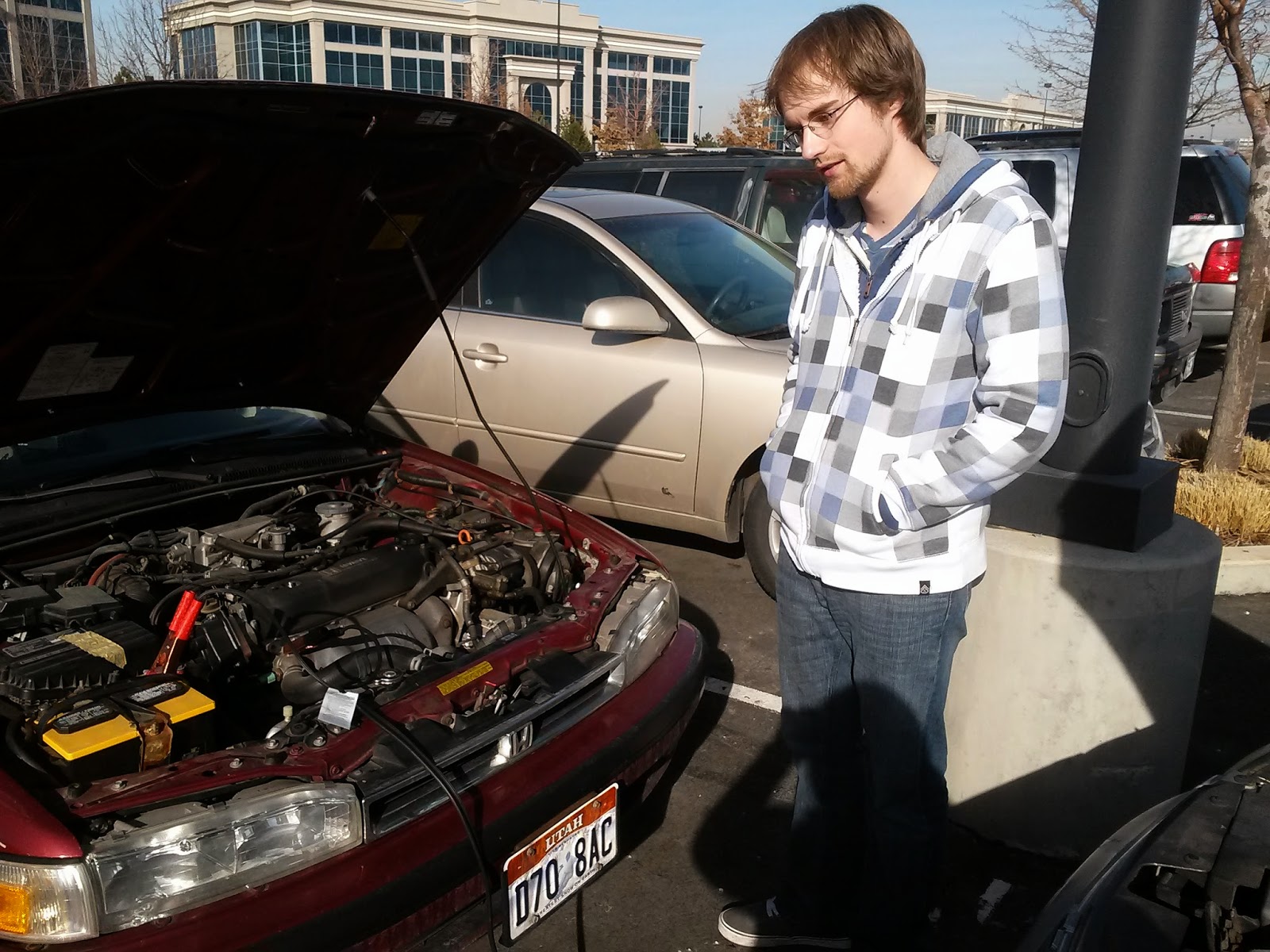 I loved my dumb Malibu. Its paint was peeling and it had the worst engine design in the world, but it was my car and I loved it. It failed emissions AND inspections and the parts to fix it would cost more than the car was worth--and the plates expired and it was going to get towed. 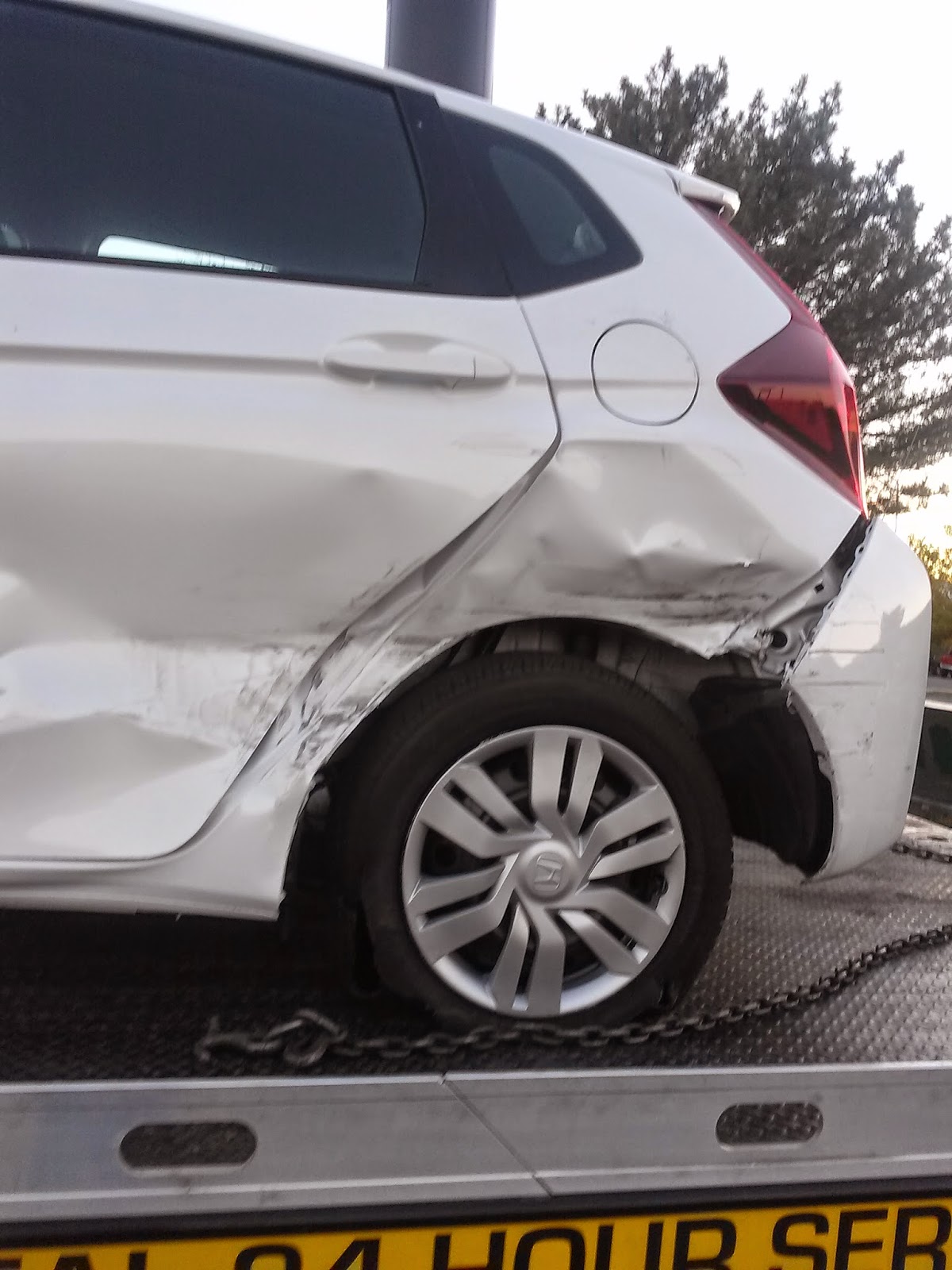 We went on a trip to Seattle with a friend, and when we went to return home, it was broken. We duct-taped and zip-tied the battery to the broken part and managed to make it back--she got it fixed, only to be rear-ended at a red light and have her car totaled.

With both of our old cars and their problems making us crazy, Jaron and I decided to make an investment and get a single good car--a beautiful Honda Fit. We drove it for a month. I was rear-ended on the freeway, pushed into another lane, and hit again. It was totaled. Trying to deal with insurance and rental cars and all of that has been a nightmare ever since, even though I literally did nothing wrong. We're still out several thousand dollars. Thanks, whatever evil creature came up with car insurance policies!

Luna is a sweet, beautiful Siamese Mix who loves people and has a good sense for how the people around her are feeling. She's thirteen years old now, and while I often treat her like she's my baby, as far as cat development goes she'd be more like my mother's age.

People will sometimes say, "Wow, isn't she getting old?" Which is rude no matter how you look at it--do you look at people's children and say, "Wow, d'ya think your kid is gonna die yet?"

But I have to admit that Luna is on par for the health problems of an older cat. We discovered that she had diabetes in December of 2013 and had been giving her insulin--though she likely already had ketones poisoning her system (we were not informed about ketones at the time). So when Luna decided food was icky and moving was icky and meowing was icky we rushed her to the animal hospital. 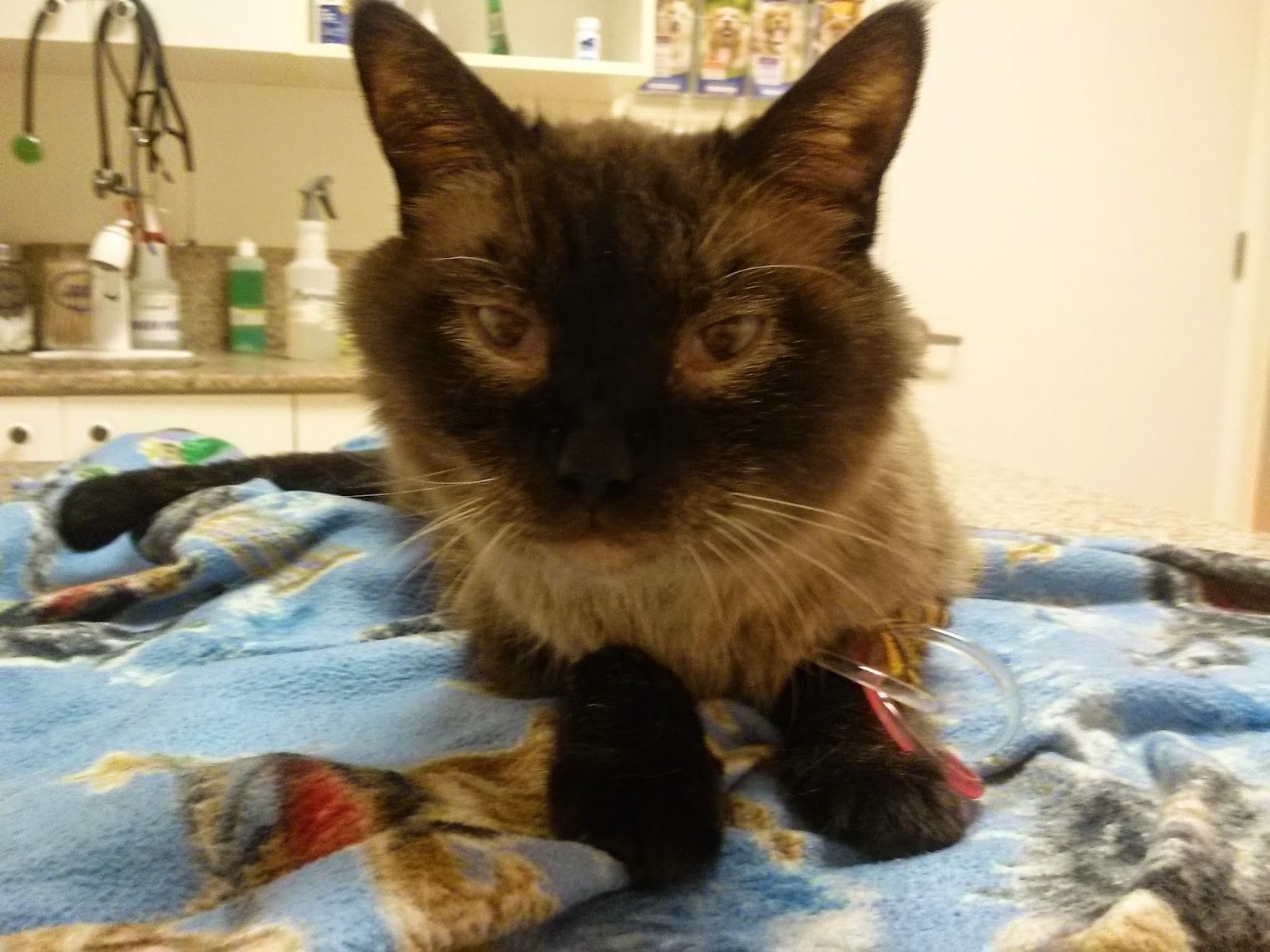 This was on New Year's.

During this time, we got much needed hugs from good friends and tons of unwanted advice ("She's old, maybe you should let her go...") from others. But after five days and lots of money spent on treatment, Luna was able to come home, actually feeling even better than she had in years.

She relapsed five months later, and then we really had no money. But we've learned a lot about taking care of a diabetic cat and although she's not terribly thrilled about being pricked with needles twice a day, she's a much more active and happy cat with her glucose in check.

The Year of Villages 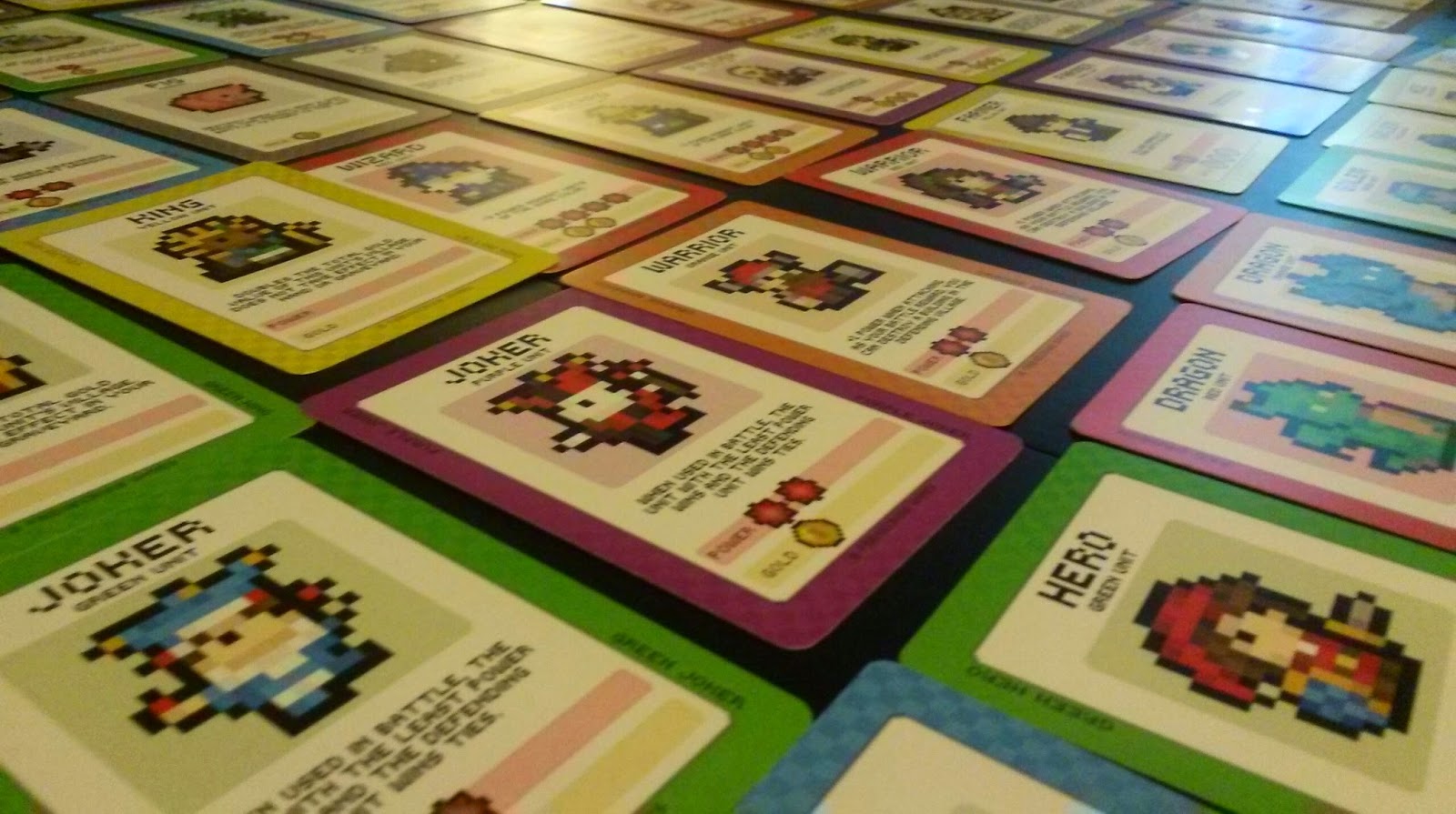 My husband, Jaron, has always loved playing games--now he loves making them, too. Back in 2011, in trying to find new things for our writing group friends to enjoy, Jaron decided to try some basic card game variations. His first attempt at making his own was a twist on rummy he titled Thief. The draw was that one could steal other player's cards for more points--but our friends didn't go for it. But Jaron was determined to make a fun game, and he decided to make his own cards. Then he made cute pixel art, and made each card have a unique ability, and gave them colors... he tweaked and added and pulled and built until he had Villages, a game which we all decided was actually really awesome. With the help of a print-on-demand game site, he put the game up for sale on the internet and later took it to a local convention.

We took it again the next year, with more copies in tow. We sold out again.

Seeing how the game had its own little market, we wanted to get the game to as many people as possible, and Kickstarter seemed like a good way to go. So we set it up, gave ourselves a goal of $1,000, and finally opened it up on January 4th, 2014.

We met our goal in nine hours.

The Villages Kickstarter was wildly successful, with nearly 3,000 backers by the end of the thirty-day campaign. Of course, this meant we had a lot more work to do than we'd expected, and even with me taking over the PR side of things Jaron had a ton of weight on his shoulders. So we tested new cards, communicated with backers, played the game everywhere we went, worked on printing...

The universe clearly didn't like Villages' success and tried to thwart it in every way possible. Costs rose, timelines slipped, orders were mixed, shorted, or damaged. We had problems with the decks. The dice. The card sleeves. The translations. The dice again. The card sleeves again. It grew into this beast of a campaign that has lasted the entire year.

But it's not all bad. People love the game. They write us to tell us that "My girlfriend hates games but likes this one," "Villages is the only thing on my son's Christmas list" and "My nieces made some custom cards for your game," or my favorite, "Your game inspired me to create something of my own." Villages has been an amazing journey, and I'm incredibly proud of Jaron for making it.

This is a small sampling of the events of this year, but there were easily four or five separate intertwining chapters here. All in all, I'm glad to be alive and I'm even more glad that 2014 is over.